Cayo Largo is an island in the Antilles, cuban island, located in the extreme east of the Canarreos Archipelago. This small limestone island is 177km south from La Havana. It is also known as Cayo Largo del Sur and has 28 km long by more or less 3 km wide in its widest part. Tourists are attracted by its beaches of exceptional beauty and scuba diving sites. The beaches are almost all concentrated in the southern part of the island while there are only swamps and mangroves in the north. There is no inhabitant standing on the island. Local workers work mainly in hotels for a period of 20 consecutive days before returning home on another island (mainly on La Juventud Island) for a 10-day break. In November 2001, the island was entirely submerged by storm associated with Hurricane Michelle.

The all inclusive formula lets you enjoy several activities such as kayaking, equipment for apnea, pedalo, the scuba diving in the pool, etc. Of course there are also other activities that you need to pay. The nautical club of the hotels is Sirena Beach and the hotels include the transport to get there.
Some hotels also offer the use of a bike one hour a day, others have a net of volleyball on their beaches, others have free tennis courts for one hour per day.
Activities such as courses of basic Spanish and Latin dance are also possible. 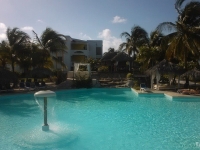