St. Joseph’s Oratory is the largest church in Canada, located on the northwest flank of Mount Royal in Montreal. The secondary element of the site is the Catholic basilica whose dimensions, its cross and the dome (60 m high and 39 m in diameter) are remarkable. The place has gardens where you can take a holy path with several sculptures that represent the Passion of Christ. Brother André took the initiative for its construction which started through donations and in 1904 a small modest chapel dedicated to St. Joseph, was inaugurated but it could not contain all the faithful while its doors were open and the faithful were praying outside so they decided to expand the place and the same was extended twice for the present appearance that can accommodate 1,000 people. The walls are covered with silver granite and the dome is covered with copper. There are several sculptures, paintings, stained glass windows, a chime and a large important organ. There are 283 steps to climb to the oratory and nearly a hundred are in wood for pilgrims who want to get it on his knees. Outside the church there is the Chapel of Brother André that is also his grave. He was beatified in 1982 by Pope John Paul II. Father André was known to receive sick people and heal them through his prayers to St. Joseph so there is a chapel where you’ll see the canes, prostheses, corsets, etc., which left the sick who felt healed.

At Christmas time, you can visit a part of a collection of more than 900 nativity scenes in the Oratory Museum.
The heart of Brother André is exposed behind a wrought iron gate in the exhibit room dedicated to his life and his work. 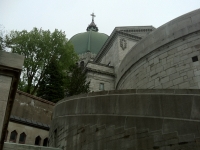